Roofing slates by Welsh Slate were the material of choice for TV property expert Sarah Beeny’s own home-in-the-making which is the star of the Channel 4 series “Sarah Beeny’s new life in the country”.

The “Homes on 4” series follows Sarah and her family (husband and four sons aged 11 to 17 years) as they swap London life for a new start on a 220-acre, semi-derelict former dairy farm in Somerset, where they are building a modern and sustainable stately home of their dreams.

Episode 8 of the first series shows the family visiting the Welsh Slate quarry where the Penrhyn Heather Blue slates are produced that are then shown being laid on the 15m x 16m mainly mansard roof of the three-storey, seven-bedroomed mock stately home.

Sarah even has a go at splitting the premium slates herself, remarking that it was “seriously impressive” that every one of the slates used on the house was split by hand.

Also, that maximising yield is very important and not only do they make roofing slates but also walling, paving, decorative aggregates and landscape products.

Roofing contractor Geoff Spinks of G&L Roofing agreed with Sarah that the slates were “a joy to fit” due to their flatness. He described the Penrhyn Heather Blues as “really, really nice slates” that were “lovely to lay”. They also feature as vertical cladding on some elements of the steeply pitched mansard roof.

The scaffolding came down some seven months after work started on site, with Sarah exclaiming the newly revealed limestone-clad house, now waterproof in readiness for the winter, was a “thing of beauty”.

Welsh Slate is also expected to feature in the second (commissioned) and third (to be confirmed) series of the show. In the second, scants (large slabs) of slate will be used as landscaping around the pond, and in the third, on a patio in the walled garden to the main house which was designed by husband Graham (Swift).

“Not only do we feel privileged that Sarah recognised that our slate is ‘the best slate you could possibly have’ but also that she was genuinely enthused at how the slates are produced.”

The focus on sustainability has included the use of ICF (Insulated Concrete Forms) for the building’s shell, recycled plastic windows, water from a bore hole, and a modern wastewater plant which returns cleansed wastewater to the land. 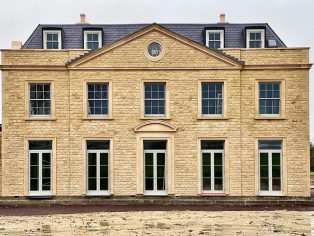