Arup believes that its redevelopment of the workplace it designed in the 1990s in West London, including a refurbished facade, will save 40,000 tonnes of carbon compared with a new build approach. ADF’s Tom Boddy reports

Situated on London’s Euston Road between the British Library, University College London, and Regent’s Park, sits 1 Triton Square – a trading building originally constructed for the First National Bank of Chicago in the 1990s by British Land and designed by Arup Associates. More than 20 years after completion, the project is now being redeveloped, with the original Arup team taking on the challenge to reuse as much of the structure as possible, and enhance it for carbon gains.

A unique aspect of the development was that it featured what at the time was considered a “pioneering” double-skinned facade, says Matteo Lazzarotto, senior facade engineer at Arup, with an outer layer of monolithic glass and an inner layer composed of double glazed units. “It was one of the earliest building examples using this technology,” he tells ADF.

In 2015, because of the “evolving needs of the customers,” British Land decided it was time to re-evaluate the existing structure and transform it to meet the demands of “today’s workstyles,” says Lazzarotto. The main drivers included increasing the office floorspace by 125,000 ft2, reconfigure the layout to provide modern, flexible and affordable workspace, and create an “exemplary” sustainable as well as healthy place to work.

Acknowledging the complexity of the redevelopment, British Land commissioned Arup to deliver all architecture, engineering and specialist design services, as well as involving most of the companies that worked on the original design.

Reuniting the original team and having companies that had worked on the building initially was a “fundamental prerequisite” for a successful redesign, explains Lazzarotto. The team had access to all of the original records and as-built drawings which “really helped during the early stages when key decisions had to be made.” Additional intrusive surveys could be avoided as they already knew the original function and performance of the elements.

Circular economy
“Everything was already set up for an office building,” explains Lazzarotto; the existing building had “very good bones; a very good framing structure with high loading capacity and good floor to floor heights, as well as good ventilation infrastructure and voids.” On account of this, the team of Arup, British Land and main contractor LendLease took a circular economy approach from the outset, sharing a “genuine commitment in creating a sustainable building in design, construction and operation.”

Instead of knocking down and starting new, the focus was to retain and reuse as many materials and components as possible. The circular economy approach aims to maintain the value of assets even as staff and processes change. Throughout the project, the team operated with a highly collaborative philosophy – including challenging one another’s ideas. “This was essential to achieving a successful outcome for the client,” says Lazzarotto.

Their commitment to this underlying philosophy in the project has seen the reuse of around 3,300 m2 of limestone, 35,000 tonnes of concrete and nearly 1,900 tonnes of steel.

Facade
According to Arup, Triton Square is one of the UK’s first large-scale projects where this circular economy approach has been applied to the facade. As the team examined the existing facade and how it was originally constructed, they realised that because of its robust condition and how it was still achieving sustainable targets in terms of energy and solar gains, the opportunity to dismantle and reuse the external skin was a realistic and carbon saving alternative to designing a new one.

Contractor Lendlease had to carefully plan the sequencing of the facade renewal operation, which involved the removal of 3000 m2 of panels and around 25,000 separate pieces. As the final component to be taken off was the first to be put back – all of the components had to be refurbished together.

The panels were then shipped to a pop-up factory set up by Lendlease in Essex (less than 30 miles away) where they were inspected, deep cleaned, refurbished and then sent back to site to be reinstalled. Establishing this factory instead of sending the panels abroad to Germany – the initial plan – saved around 25,000 transport miles – reducing carbon and also supporting UK jobs.

Overall, opting to refurb the external facade has saved over 19,000 tonnes of carbon and represented a 66% reduction in costs. The process started in April 2018, and reinstallation did not begin until summer 2019.

Key interventions
As well as reusing the exterior part of the double-skin facade (the internal skin was replaced) the team’s approach to meet the objectives of the project were to reassess the original layout of the square plan with corner cores. “The key challenge was to keep to the brief without changing the footprint of the building,” says Lazzarotto.

When the building was first designed, the height of surrounding structures limited how high the team could go. However, over the last 20 years, 10 to 11 storey buildings have been constructed in Regent’s Place, which has established a higher horizon line in the area.

The redevelopment added three storeys – producing an 85% increase in net office area. The four corner cores have been extended to support these floors, with the original type of limestone cladding having been sourced to enclose these new sections. As well as serving the office levels, Lazzarotto explains that these stair cores also serve the mixed-use “ground floor-plane,” which is accessed via the perimeter.

The designers set back the additional levels to create roof terraces. “The aim was to achieve amenity and maintain the consistency of proportion across the elevation,” says Lazzarotto.

The original building’s octagonal atrium which was on completion regarded as the largest enclosed atrium in London at 36 metres x 36 metres, has been reduced to 17 metres x 17 metres and infilled with a new steel structure. Lazzarotto explains how “consolidating the atrium transforms the building from a very sterile space, glazed off at every floor to a dynamic open plan allowing for collaboration across floorplates as well as maximising natural daylight and increasing office floor area.”

The southeast corner core – where the main entrance is located – has been redesigned to give it “better prominence and engagement,” says Lazzarotto, “creating a more dynamic reception area that fronts onto Regent’s Place.”

Socially active
1 Triton Square is set to become a workplace for 3,500 people. Arup’s design puts a major emphasis on creating a ‘healthy’ workplace that prioritises “wellness and interactivity,” with specific focus on incorporating amenity, daylight and social connectivity throughout the building.

To help achieve this, the refurbished facade has been reinstalled one storey up from its original position – “a special part of the project,” says Lazzarotto, “it will allow the building to interact with the square at ground level.” The shifted facade will enhance the lower level space and maximise daylight on the ground and first floor. Also, the 282 m2 rooflight in the atrium and the floor-to-ceiling glazing in the offices and stairwells floods the interior with an abundance of natural light.

As part of the healthy workplace philosophy, the layout incorporates breakout space and stairs between floors to promote walking and visibility. There is also a large gym and health club in the basement, and over 500 spaces of bicycle storage at ground level – incentivising healthy and green personal transport.

The five terraces, formed by setting back the facades on the new upper floors, provide space for socialising, working, and relaxing. They will offer panoramic views of the city and Regent’s Park, and facilitate a variety of uses from rest and contemplation to events and sporting activities. The terraces have “established the relationship between the outside and the inside,” says Lazzarotto.

Marginal gains
Adopting the circular economy approach and reusing as much of the existing structure and fabric as possible accounted for 45% of the total carbon saving. The remaining interventions stem from Arup’s ‘marginal gains’ approach.

As the project evolved during the design process, they discovered there was scope to ‘go greener’ than originally planned. “The marginal gains strategy demonstrated that we could get from BREEAM Excellent to BREEAM Outstanding for a minimal

extra cost,” says Lazzarotto. As it turned out, this was roughly 0.3% of capital expenditure, compared to a perceived industry norm of around 5%.

and referenced this against a “business-as-usual scenario” to establish the carbon savings. “We chipped away at every aspect of the building using our collective expertise to save carbon, cut waste and deliver the best working environment,” explains Lazzarotto. He adds: “every possible system, component and strategy was analysed and refined to improve performance and deliver the most sustainable outcome.”

Conclusion
The redevelopment of 1 Triton Squareis an exemplary piece of integrated architecture and engineering which prioritises retention of structure and fabric, and one where the team has reunited to improve on its original design, and achieve an important sustainability result.

The project relied on the wide experience of Arup, Lendlease, Permasteelisa and Gartner, and the “innovative approaches that the whole team adopted,” explains Lazzarotto. “The requirement was to produce a building that had much higher ambitions around sustainability, carbon and energy usage than the original,” says Lazzarotto. However, he asserts that Arup’s objective was also to create a “wonderful building” to be in, with good daylight, and enjoyable spaces in which to work and circulate.

The decision to refurbish large sections of the existing building based on circular economy principles represents a challenge to the industry status quo in terms of sustainability approaches. There arguably remains a widely-held perception that new structures are more sustainable than regenerated buildings.

However, Arup has investigated the carbon savings achieved by choosing to retain and renew the structure, finding a 45% reduction in emissions in construction and operation – i.e. whole life carbon – versus a typical new build alternative.

Overall, the building has contributed to an estimated CO2e savings of 40,000 tonnes – equivalent to powering 9,900 average UK houses for a year. Of this, just under 25,000 tonnes was embodied carbon with the remaining saving in operational carbon over 20 years of the building in use. Arup concludes: “This achievement would not have been possible without this partnership, and the collective vision of Arup, British Land and Lendlease.” 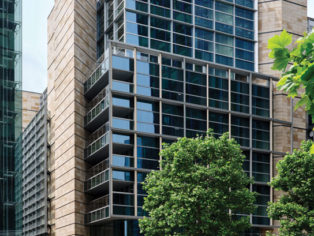 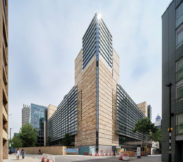 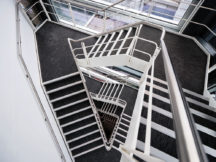