The complete range of architectural glazing systems from leading UK manufacturer Kawneer feature on a flagship building for the University of Warwick.

Kawneer’s AA®100 curtain walling, AA®541 windows, AA®720 doors and AA®100 slope glazing have been used on the Mathematical Sciences Building on the university’s main central campus on the outskirts of Coventry.

The zone-drained curtain walling with 50mm sightlines, top and side-hung casement windows and thermally superior doors feature throughout the lecture rooms while the series 190 heavy-duty doors have been used at the entrances and the zone-drained slope glazing in the atrium.

They were installed over five months by a team of six from approved dealer APiC UK for main contractor Morgan Sindall and included extended vertical caps to the curtain walling on the south-west elevation.

The 68,490ft² building is a key strategic development for the university, part of the Russell Group of Universities, which will enable closer collaboration between its globally-recognised Computer Science, Mathematics and Statistics departments.

The six-storey building is structured around the main central atrium and caters for both under-graduate and post-graduate students as well as providing a base for a number of notable academic researchers including some working as part of the high-profile national institute for data science, the Alan Turing Institute.

Located next to the existing Maths and Stats building (Zeeman Building) and the Computer Science building and primarily brick faced, it features superb lecture rooms and student work areas, well-equipped computer labs, state-of-the-art technology and a strong focus on sustainability.

“This new facility will enable our three departments to grow and to work even more closely together. In particular, it will allow us to exploit Warwick’s position as one of the five UK universities recently chosen as partners in the creation of the Turing Institute, including interdisciplinary space for both research and teaching in data science. It will also allow us to bring our graduate training programmes closer together in a new Mathematical Sciences Graduate School.”

The Mathematical Sciences Building was made possible thanks to a grant from The Wolfson Foundation and donations by alumni and friends of Computer Science, Mathematics and Statistics at Warwick.

The University of Warwick has more development planned or underway at its campus in Coventry. 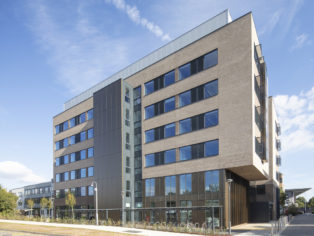