The task for Fahed + Architects was to develop a temporary pavilion for hosting the ABWAB 2017, that needed to be made of a waste material left for recycling at Bee’ah’s yard.

Upon visiting the yard, the architects came across a massive inventory of materials that have reached the end of their intended life cycle. At a particular compaction point they stumbled upon an excess of majestically laid coil springs. The material was inspiring. It was light, let the air pass through, let the light pass through and had absolutely no resistance. However, by virtue of its structuring it had its own strength.

The environmental commitment that F+A uphold prompted them to bring a dose of meaningful recycling to Dubai. Envisaged as a creative sculpture, the pavilion is as temporary as the inspiration which brought it to life.

The space where the pavilion is to be located is in between the built masses of D3. The idea was to erect a structure that floats like a cloud in between these volumes and would facilitate, with the ample room within its core, the viewing of various exhibits.

The structure should convey a sense of hope; hope for a better tomorrow. And how on regular days, everyday materials can be transformed and recycled in a meaningful manner. The bedsprings act as a coil mesh, distilling the light that passes through it to reveal interesting patterns on the ground while enveloping the core structure and giving it an organic silhouette.

Drawing upon the shapes of a cotton candy, coral cluster in a reef, waves in the ocean and clouds in the sky, the structural system illustrates a series of interconnected posts to support the clouds of mesh. The structure is about going back to the basics, being in touch with the ground, seeing what’s around, experiencing light and interaction.

“The Abwab pavilion, an embodiment of  hope, highlights the most relevant value – reuse and recycle, while setting new benchmarks in unconventional design. The structure is designed as a contemporary and inviting space that enables it to be perceived as an artistic expression.” 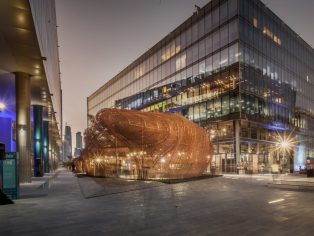 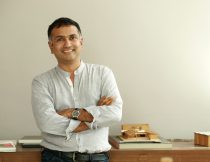