A new Canadian engineering faculty building will research and develop solutions for clean power innovation, as part of the Government’s response to climate change. ADF’s Sébastien Reed speaks to its architect Venelin Kokalov about a project that uses glazing to engage with its surroundings

Revery Architecture was first approached by Simon Fraser University (SFU), which has three campuses in British Columbia, Canada, to design its new Sustainable Energy Engineering Building in 2015. The architects were initially requested to work on the functional programme and indicative design for the new centre, whose eventual construction was contingent on grants from the Canadian Government under the Federal Department of Innovation, Science and Economic Development Canada’s Post-Secondary Institutions Strategic Investment Fund (SIF).

After receiving confirmation of funding in 2016, the client pressed on with interviews to find a suitable architectural lead to take the project from design through to construction. They did not have to look too far, as they selected Revery to continue the work they had already begun.

According to the project’s original brief, the client envisioned “a five-storey, world-class, state-of-the-art, LEED Gold building designed to reduce emissions and energy consumption, situated on lands contiguous to the university’s Surrey campus. The gross floor area of the proposed building is 14,445 m², plus one level of underground parking.” The building was to represent the university’s first expansion beyond the original campus, as well as being a vital new addition to downtown.

Beyond having completed initial feasibility work for the new building, the architects list some other core reasons why they were awarded the project; the first being their significant design experience in the city of Surrey. This includes planning work for the city centre, a library and an aquatic centre, all of which make Revery particularly attuned to Surrey’s unique dynamic, and planning landscape. “We’ve developed a strong understanding of and relationship with the approving authorities,” says Kokalov.

Another reason; the practice’s alignment with the ethos of the project. Seeing eye-to-eye with the client in the “quest for innovation,” they wanted to create a “community building” which would “engage the world” in addressing the most timely issues.

Responding to the brief, Revery’s aim was to create a building that integrates with its urban context, engages SFU and the local Surrey community, and becomes a place that elevates user experience.

Flexible in function
The programme is organised around a central atrium space, oriented east-to-west on axis with the adjacent Surrey Central SkyTrain line – providing light, rapid transit, and opening onto University Drive. Wider in the east than towards the west, the full height ‘flatiron’-style tapered atrium divides the building in two; to one side an L-shaped block and to the other a more regular rectangle-shaped block.

The atrium facilitates circulation between the ground and third floor, while the integrated spectator seating and a large, open, ground floor base provide functional space for both formal and informal gathering and activities. “It’s become the living room of the building,” says Kokalov, “it’s where the cross-fertilisation of ideas can take place; it welcomes the public.”

Because the building is in the heart of Surrey’s downtown, the architects deemed it vital to somehow continue the public realm into the building, both to “activate” it and to illustrate the partnership between SFU and the city itself. In this vein, the most socially active parts of the programme are all found on the ground floor; the cafe, a pre-function area and a 400-capacity lecture hall – available to both SFU and the local community, student central services, common and recreational rooms, and the atrium base.

The upper floors are devoted to teaching functions with another 120-seat lecture hall and ‘innovation space’ housed on the first floor; library, lounges and process laboratories on the second floor; research, prep and classrooms on the third floor; further educational spaces on the fourth; and staff offices on the fifth.

When quizzed on changes to the design that might have interrupted the architectural process, Kokalov answers: “The schedule wouldn’t allow it. SFU was clear from the outset.” With the client stressing the “importance of flexible spaces,” research labs had to accommodate a spread of topics and classrooms needed to support diverse teaching styles. This is perhaps best illustrated by the rooftop, which was designed to accommodate a research lab, should it be needed.

Inside, the building has a mix of exposed concrete and white painted drywall. Timber is also used liberally throughout. This includes wooden slat ceilings, maple accents to the atrium balconies, timber floors to the tree pods, and timber for the spectator benches in the atrium. Maple plywood and dark-stained plywood furnish the lecture hall there, along with dark fabric-wrapped panels. Additionally, perforated dark-stained plywood and paper-faced insulation are used to provide acoustic treatment.

SE3P’s location directly across the street from existing SFU buildings enabled the architects to establish dialogue between the two. For example, the main entrance was placed towards the south-east to clearly bridge old and new.

Circuit board
Inspired by the geometric pattern of electrical circuit boards, the facade’s design is clearly and symbolically linked to the technological themes that make up the pedagogical content taught within the building. White precast concrete sandwich panels alternate with reflective glazing which is framed by white precast fins outlining the entire facade.

This precast box is elevated several metres from the ground, and appears to float thanks to a band of transparent glazing at its base. Together, the different areas of glazing increase visibility and connection, providing a sense of public realm to both the interior and the exterior of the building.

Kokalov continues: “The juxtaposition of the heavier precast elements versus the reflective glazing helps to animate the facade while symbolising the opposing forces commonly encountered in engineering; tension and compression, positive and negative.” Throughout the scheme, glass was used as a means of making the building seem more porous. Clear glass at ground level “allows for the interior public space to extend from the street and engage the neighbouring community,” says the architect.

The same materials were used on each of the elevations except for the cut-out on the south west corner. Here, insitu concrete was used as a cost-saving tactic. The architects expected the cut-out to eventually be filled in as the facility and university continue to expand and develop, so material specification wasn’t seen as pivotal.

Less is more
“Through careful sculpting of space, selection of muted and natural materials, and the introduction of natural light and views to the outside,” says Kokalov, “we tried to create spaces within the building that elevate and enhance the user experience.”

Kokalov remarks that the ratio of opaque solid wall to glazed wall is approximately 70 per cent to 30 per cent respectively, making it a relatively lightly glazed building. “Having said that,” Kokalov qualifies, the visual dominance of translucent material “is due to the strategic placement of the glass that it gives that perception.” He continues: “It is very successful in this regard – it gives an open feeling to people which meets SFU’s philosophy of a ‘community engaging a school’.”

The architects faced some difficulties in achieving their desired exterior aesthetic, most notably in the construction phase. The precast panels and curtain wall infill panels were made independently, rather than being prefabricated together, and all of the mounting brackets were located on the slab edge. The main challenges, according to Kokalov, came from the installation sequence, the achievable tolerances, and the glass fabrication lead time.

The orientation of the precast and glazing systems is not entirely vertical. Instead, they weave left and right as they climb the building. This required the gap between the two systems to be increased in order to accommodate both horizontal and vertical movement due to expansion and contraction originating from temperature fluctuations. “Simply caulking the joint was not an option because of the load transfer between the system,” insists Kokalov.

As a consequence, meticulous on-site quality control of precast concrete panels was critical to the curtain wall installation; for example the 2 cm gap established between the precast panels and glazing panels. The glazing contractor had to meet and install the panel accordingly otherwise the panel had to be rejected.

Two main types of glazing were specified by the architects. Highly reflective glazing was used functionally; to reduce heat transmission, and also aesthetically; to reflect the sky and create visual interest for passers-by. Secondly, to draw as much natural light as possible into the building, high VLT (Visual Light Transmittance) glass was used for the storefronts at street level, for the atrium glass wall, and at the south east corner on level five where the staff lunchroom and open office are located.

LEED-ing in sustainability
In addition to specifying durable materials and designing long-lasting and flexible places into the scheme, the building had to embody the sustainable ethos underlying the facility’s function. To do so, the architects sought to achieve LEED Gold certification – awarded by the Canada Green Building Council (CaGBC).

Reductions in car parking spaces needed by the local municipality, the provision of extensive vegetation – including native and local species – throughout the site, the implementation of a stormwater catchment system, and a passive ventilation approach taking advantage of the atrium’s natural draughts and minimising the need for mechanical ventilation. These were just some of the measures taken to sensitively meet the certification requirements.

The approach produced significant praise from the client, as Ian Abercrombie, architect and director of campus planning and development for the university, who admits: “SFU was a demanding client. We required an architect that understood the complexities of an academic and research facility, yet also understood its need to provide a high standard of urban design in the emerging Surrey City Centre.” He concludes: “Revery Architecture responded to these challenges and took direction from SFU facilities staff, academics, and researchers, in shaping a functional, yet inspiring building.” 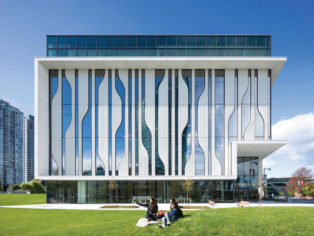 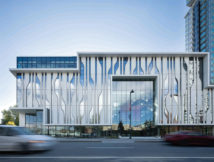 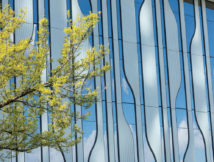 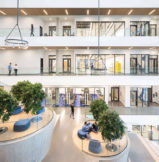 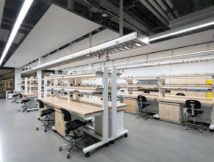 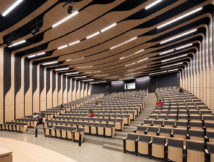