The large scale application of 3D printing, or additive manufacturing, on construction projects became a reality last year when the little known Chinese firm WinSun announced it had 3D-printed 10 concrete houses in a day.

The firm also used the same technique, using a printer head on a massive gantry to pump out a mixture of fibreglass, steel, cement and binder, earlier this year to build a 1,100 sq m villa and a five-storey apartment building.

Less well publicised, but arguably equally as important to the building industry, have been recent developments in the use of 3D printing in metal. Engineering consultant Arup has led a project using direct laser sintering (an additive manufacturing technique using a laser to sinter powdered metal, binding the material together to create a solid structure) to create geometrically complex building components, while the R&D start up MX3D has led a team developing computer-controlled robots fitted with welding arms designed to 3D print entire steel structures.

“I would not be surprised if, in five to 10 years’ time we regularly see 3D printers, using metal or other materials, in factories or on construction sites. When you consider that many major projects starting up now will be on site around then, it is important that designers take this technology into account and keep an eye on any new developments they might utilise.”

A bridge too far?

The MX3D-led team of researchers in the Netherlands is innovating a new 3D printing methodology, based on conventional welding techniques, that will see two automated robots construct an entire steel bridge over a canal in Amsterdam, without direct human intervention.

The R&D project is being carried out in collaboration with major industry players including software firm Autodesk, construction firm Heijmans, ABB Robotics and computer maker Lenovo. The project is being billed as the start of a revolution as digital fabrication enters the world of large scale, functional objects made of durable material.

The team is currently consulting with the City of Amsterdam to determine where the bridge will be located and construction is due to start in Spring 2017.

The two single-arm industrial robots, supplied by ABB, have been modified to incorporate multi-directional welding nozzles, and will effectively ‘draw’ the bridge underneath them in “mid-air” using advanced software to guide them from one bank of the canal to the other.

The 3D printing technique is a form of welding, using small amounts of molten steel, added to stainless steel to fuse them together. As consecutive layers are built up, a solid and robust monolithic structure is formed, eradicating the need for support-structures.

Unlike laser sintering methods of additive manufacturing, which must be carried out in a controlled factory environment, this welding technique should enable construction in the open air, potentially ushering in a new era for construction.

“The technique could have big implications for the world of construction, and theoretically one day we will be able to print structures anywhere the robots are able to go. However, this is a development process and the technology is not there just yet. If we want to print the bridge outside, we will have to protect it from the wind, otherwise the shielding gases, used during welding, would just blow away. We still have to figure out a way to do that.”

The intense light produced when welding is another concern, and a potential hazard to bystanders, so construction may have to take place over a canal in a secluded part of the city, away from crowds. “We hope we can use the robots live at the location where the bridge will stand, but that will depend on where it is, if it is too busy we might consider printing off site where there are fewer people, then move the completed structure into position.”

The team is is currently carrying out software development work to enable the system to upload 3D models and translate them into a printing strategy and a language that can control the robots. A new test facility, in a large shipping wharf in the north of Amsterdam, will open at the end of September.

According to Geurtjens, detailed strength calculations must be carried out to ensure the bridge is able to support its own weight and that of the robots riding on top. However, he says in general strength is not a concern as the molten material solidifies and cools down fast, and just one minute after printing it is able to support a full load.

“The main challenge is ensuring the robots know their position in space, from one moment to the next, and in relation to the bridge as it is being printed,” he said. “A significant aspect is the design for the robots’ propulsion system. We are currently looking at either a wheel or track system, or a system using special grips able to move the robot forward one position at a time as welding progresses.”

The bridge project started life over two years ago, when Autodesk came across a Youtube video of MX3D’s new welding technique and, excited by the potential, flew to Holland to see what it could do. A subsequent meeting at Autodesk’s office, in San Francisco, triggered the idea of printing a bridge to showcase what is possible using the technique, above and beyond printing smaller objects.

“Amsterdam is known for its canals and bridges, so a bridge seemed the logical step to take,” said Geurtjens. “We now have different locations on our radar but it depends on what the City wants and what is practical, we need a location that is not too busy but also has the character of the Old City of Amsterdam.”

Based on initial tests and printing speeds achieved, MX3D predicts construction/printing time will take around three months. The final design for the bridge should be complete in about a year’s time.

Direct laser sintering has previously been applied by industries including automotive, aerospace and healthcare, but only recently has construction started to explore the possibilities.

The collaboration, with design software company WithinLab, 3D printing specialist CRDM/3D Systems and 3D printing manufacturer EOS, focused on the production of 1,200 intricate steel “nodes” for a proposed street lighting scheme in the Netherlands. The pioneering research, led by Salomé Galjaard, senior designer at Arup, was funded when the construction project was put on hold.

The nodes form part a lightweight steel structure of angled struts, tension cables and lighting attached to the sides of buildings along a main street. The complexity of forces at work meant that each node, though similar in design, had to be produced using a unique geometry.

Under the original design, each node would have been cut and welded individually by hand, but phase one of Arup’s research demonstrated that, by designing the nodes for production using direct laser sintering, they could be formed faster, to higher quality standards and with less wasted material.

“The original design required a lot of similar, but not identical, products to produce the 1,200 nodes, whereas it should be cheaper to have one repeated element. I thought 3D printing could help,” said Galjaard. “Instead of making one mould that produces the same products over and over, a 3D printer builds everything from scratch and you can easily make small changes to the design.”

Through a process of topology optimisation, design software was used to precisely calculate the volume and shape of steel needed to support the applied loads in the structure. “The original node design had a lot of material not really doing anything and traditional production techniques require a great deal of effort and expense to remove it. By building from scratch, using additive manufacturing, it’s easier to only include material where you need it,” said Galjaard.

Phase two of the project further optimised the design by integrating other street lighting components into the 3D printed node structure, including a pin and fork connection and a spanner, used to control tension in cables connected to the node.

This rationalisation helped reduce the overall weight of the structure and eliminated a total 15,000 products from the overall scheme, reducing costs related to their purchase, shipping, installation and maintenance.

Whether using 3D manufacturing would reduce overall costs on this scheme is harder to determine, explained Galjaard: “Cutting and welding steel plates and tubes is not a smart or a cost effective process, but on the other hand, 3D printing costs are also still very high. However, if you consider the entire lifecycle of the product and its impact on the structural system, cost reductions are most obvious.”

Arup’s latest 3D printed nodes are 75 per cent lighter than the original design, which meant the weight (and therefore the cost) of the rest of structure, including the cables and struts, could be reduced. In addition, the optimised design cut tension and compression in connected components by 20 per cent, meaning thinner cables and tubes could be ordered. “In total, there were 15,000 fewer products to order and install, and less interfaces between components, meaning reduced ongoing maintenance costs,” said Galjaard.

Currently, the Arup team is looking for a real world project to apply its learning to, potentially an art installation, or a small building or structure with relatively small, complex 3D parts suitable for 3D printing. Applications in other industries might also take the technology forward, added Galjaard:

“It might be rigging for a sailing boat, I get a lot of calls from the oil & gas industry hoping this is will be a solution to some of their problems. Working on a different application can lead to the discovery of new benefits of techniques you hadn’t considered before,” she concluded. 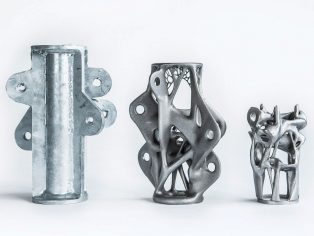