Delegates at the third British Information Modelling event, which took place in central London on 11th May, have rated the event a big success. With more than eighty registered invitees, the early evening seminar was hosted by architects KPF at their Covent Garden HQ.

Including speakers from IBM, Innovate UK and HOK, together with technology innovators and industry experts, the event attracted professionals from across the Building Information Modelling (BIM) sector. Organiser 3D Repo, fuelled by the success of the first three events, has already announced the next seminar in the run up to Digital Construction Week, which takes place in October 2017.

“Events like British Information Modelling show there is a real hunger for innovation, new technologies and their application within the BIM sector,” commented 3D Repo’s CEO Dr Jozef Dobos. “In fact, we were so enthused by the attendance and feedback that we are already planning the next event in the build up to the upcoming Digital Construction Week in October.”

Delegates were engaged by Simon Hart, Senior Innovation Lead for Smart Infrastructure and Management Officer of the BIM Task Group at Innovate UK, who introduced the work of the HM Construction Board and explained the roles of different organisations and initiatives in delivering Government projects. He described how the UK is leading the world in BIM and how this knowledge and expertise is being exported worldwide.

The presentation from Steve Brown, European Client Lead at Emmy Award winning production studio Unit 9, was also very well received. With a background in consumer and advertising, he explained that, while technologies such as VR and AR are here to stay, they are still in their infancy in many sectors. Greg Schleusner AIA, Principal and Director of Design Technology Innovation at HOK, presented an integrated BIM model while Martin Coyne, BIM Manager and Associate Principal at international architecture practice KPF, explained the cost-saving issues that drive the adoption of new innovation.

Heba Bevan, the brains behind the smart sensor revolution Utterberry, described how high profile projects by organisations such as Crossrail, Skanska and London Underground are benefitting from real time data, while David Platt, an associate partner in IBM’s Global Centre of Competence for Engineering, Construction & Operations (EC&O), emphasised the need for investment in innovation and the role of integration. Andrew Norrie, Commercial Director at 3D Repo, introduced the concept of 3D Diff, before the evening concluded with a lively panel discussion prompted by audience questions. 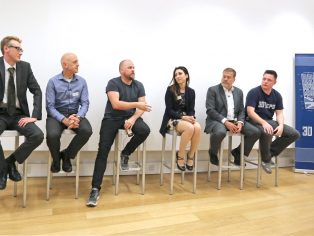