Enhanced acoustic requirements are becoming a commonplace consideration in contract documents, says Mark Hargreaves of Technal, who discusses glazing strategies to mitigate noise and the correct approach to acoustic design

As a main element to most buildings, the glazed openings have long played a key role; contributing natural daylight and ventilation, as well as being integral to overall energy performance, both in terms of thermal insulation and solar gain. Arguably, however, it is in terms of their acoustic performance that the bar is continuing to be raised most dramatically, in response to the growing impact of noise pollution on our everyday lives.

This worsening situation stems from a variety of sources – including higher traffic volumes, expansion of rail and air travel, and a growing tendency towards a 24/7 society where the population lives, commutes, works, shops and seeks entertainment in ever closer proximity.

It is in fact recognised that UK housing developments have among the highest densities in the world. It is not just the noise of neighbours and passers-by, which pose a problem: being beside a trunk road or beneath a flight path can also have a serious impact on places such as schools and hospitals.

The different elevations and roof areas that often occur on commercial or large residential projects have to provide protection against the weather, while complying with most parts of the Building Regulations: among which Approved Document E – covering resistance to sound – is becoming increasingly important.

The official guidance regarding acoustics for the design process is provided by BS 8233: 2014, taken in tandem with other authoritative documents such as LEED or BREEAM, which is widely regarded as the most holistic measure of a property’s environmental credentials.

It is important to recognise the very complex nature of sound, with different components and frequencies, which lie within the pressure spectrum to the decibel scale. All such sounds can be attenuated and reflected through careful detailing of glass, air gaps, interlayers and frame components.

In compiling their acoustic report, the acoustician conducts a detailed survey, measuring the noise levels expected on the projected footprint, at multiple points and at different times. Each level of the building is assessed to determine the degree to which the facade system and its glazing elements must be specified: taking account of the minimum attenuation required to deal with the noisiest periods.

The next stage in achieving good acoustic conditions within a building is to understand how the control offered by different materials or elements to the envelope can be compromised by their interconnections, or the surrounding structure.

The phenomenon known as ‘flanking sound’ or ‘flanking noise’ refers to the energy waves, which pass over or around, rather than directly penetrating a barrier. So, although an insulating glass unit or architectural glazing system may offer good acoustic insulation, noise can still penetrate to the building interior, or pass between spaces.

The system provider and facade consultant must therefore seek to address rigid connections, especially metal-to-metal interfaces, in order to prevent sound waves being transmitted through pressure plates frame profiles, joints, brackets and anchor points. Flanking noise can therefore be reduced greatly by careful detailing, such as acoustic infills to mullion and transom profiles, and creating additional acoustic barriers between the frame and floor slabs.

It is therefore essential to ensure the window; door or curtain walling system chosen features an effective acoustic seal, together in tandem with effective sealing for guaranteed air tightness.

The selection of glass type and double or triple glazing

The choice of glass type and dimensions, including that of the cavity, impacts dramatically on the level of acoustic performance that is achieved. Industry standard double-glazing will deliver in the region of a 30 dB to 35 dB reduction in sound against normal passage through air.

This can be improved upon significantly through specifying thicker panes and special acoustic grade glass, and widening the cavity or by introducing secondary glazing: which can generate a 40 dB or greater reduction. Rather than this being a linear improvement, every 3 dB achieved represents a doubling in performance. And just as combining varying densities of material is effective at combating sound transmission, the best results for glazing units are obtained when the inner and outer panes are of different thicknesses.

It should also be assessed whether to include a laminate interlayer for enhanced acoustic performance – potentially also improving thermal efficiency and safety – or perhaps to go from double to triple glazing. In addition to increasing overall unit thickness, the latter raises the cost of glass by some 50 per cent, and the additional weight may move beyond the capacity of the framing system originally considered. 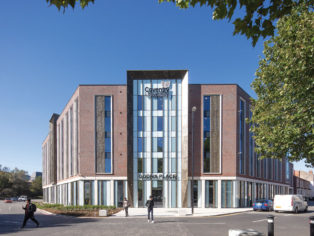 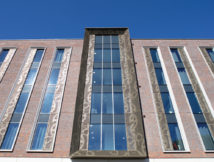