Faced with the task of cramming 90,000 m² of new office space onto a 23,000 m2 plot of land, in the Fontenay-sous-Bois district of eastern Paris, the last thing architect Anne Démians wanted to do was create an unsightly glass and metal high rise.

The client, prominent French banking group Société Générale, was eager to transform the dour image of the banking profession, and provide its employees with a people-centred building, catering to modern technological working methods, with a futuristic aesthetic and strong credentials of environmental sustainability.

The solution was to fold up the terrain, like a sheet of paper, to create three sensual, wave-shaped blocks that appear to emerge directly from the landscape. The new division of Société Générale at Val-de-Fontenay, referred to as Les Dunes, is wrapped in over 200 km of 100 per cent reconstituted, 100 per cent recyclable wood strips, formed into aluminium framed panels.

The strips run in continuous bands over the walls and roof, at several locations they sweep outwards to form canopies, over balconies and doorways, and appear to merge into the ground at the base of the buildings.

Démians has refered to the project as a new and daring experiment in workplace design, she told ADF: “Les Dunes offers a new image of modernity through innovations in construction, in a gentle rupture from what has been done over the past 30 years. The entity as a whole is more than a building, it is a landscape.”

Société Générale has a long history of commissioning innovative architecture. Its head office, at 29 Boulevard Haussmann in Paris, was redesigned in the Art Nouveau style, in 1912, by architect Jacques Hermant. The twin tower offices in the La Défense business district of western Paris, were designed in the 1990s by Michel Andrault and Pierre Parat, the brains behind some of the largest skyscrapers in the district. They connect to the slender triangular prism of the Granite tower, designed by Christian de Portzamparc, the first French architect to gain the prestigious Pritzker Architectural Prize.

Démians’ 2011 competition-winning design for Les Dunes has a much less angular appearance than its forebears, and a strong horizontal emphasis. The blocks are oriented east/west, to take advantage of transversal light and to allow for the creation of the communal outdoor areas in the ‘valleys’ in between. These south-facing gardens include a herbarium and trees to increase employees’ connection with nature.

The project is bordered on one side by the Val-de-Fontenay suburban train station, which handles roughly 30,000 passengers a day, and on the other by the broad avenue of Maréchal de Lattre de Tassigny. The hemmed in plot suggested a very different treatment from the one devised,  Démians says: “You might have expected the creation of a traditional closed garden courtyard, a confiscated urban space surrounded by re-assembled corner buildings. But I moved away from this idea very quickly, instead opening up the space completely at both ends to create a form of ‘headless’ project without beginning or end.”

The buildings are served by a long, double height, interior street, containing a business centre and cafes, that runs below ground and connects into the rail station.

A key client aim was to deliver an atmosphere conducive to calm and concentration, with natural light and outside views. Workspaces benefit from very large 4 metre x 3 metre windows that look out onto planted greenery of the ‘valleys’ between buildings.  The easily accessible outdoor areas have a semi-tropical climate and provide areas suitable for quiet individual contemplation or group meetings.

The brief required an office with clean energy performance and spaces that can be adapted to the needs of the future generations of workers, enabling reversibility and modularity, and enhancing collaboration.

This sentiment was expressed in a company manifesto, published in the Journal of Financial Economics in 2015, it states: “We must observe how the digital relationship has changed our physical relation to work. Coming to a soulless office in the morning to plunge head first into a computer alone behind a desk, or worse, in the middle of an open space, no longer makes any sense. Coming to the office has to provide something more. New workplaces will respond to the human need for warmth and sharing. To meet this challenge this gigantic project must integrate the concepts and methods of our digital age: co-creation, collaboration and cooperation.”

The specific curved profiles of the three buildings are based on three frequencies of sinusoidal wave, their inflections were stretched upward until they met the spatial real estate targets set by the programme.

Where previously, glass and metal facades were used to express the power of the company, a shift towards “a more individual expression” led to the specification of undulating wood strips on the outer surfaces. As Démians poetically notes: “With the evolution of a facade, there may be new materials to explore other than those with which we have been filling our sketchbooks for years.”

The wood is mounted on an extruded aluminium subframe, and forms part of a layered curtain wall solution, including windows, corridors and balconies, detailed and supplied by Italian envelope specialist Permasteelisa.

The wood/aluminium shell is raised above an underlying glass/aluminium Alucobond curtain wall. This gives the facade a thickness intended to mimic that produced in buildings built in stone and concrete. The rear curtain wall incorporates blinds, the large sliding glass windows intended to maximise views.

The wood strips are highly durable, require zero maintenance throughout the building’s lifespan, and function principally as sun shades. In addition, the material imbues the facade with a natural, rustic tone and the slatted arrangement increases its transparency.

The wood was sourced from Japanese supplier Sekisui and was formed from recycled wood crushed into a pulp in an industrial process that removes the oil content.

“This particular wood does not exist in Europe and it was only after several months of research, in Japan, that I could fully understand all its qualities,” says Démians. “The manufacturer, perhaps because of its insular fragility, is several years ahead of Europe in terms of industrial research. It was a new material for us, but has been used in Japan for more than 30 years.”

The material was mounted onto an extruded aluminium profile, which was bent as a single unit to create the finished 50 mm-deep panels ranging in size from four to seven metres tall. The use of micro-strips of wood helped increase adhesion and improve resistance to deformation over time.

The more acute curvature of the roof was created using three separate module types with different radii and tangents designed to ensure perfect continuity between panels.

The facade solution was a key element of the project’s environmental performance and “a major and communicative symbol of the project”. The design achieved LEED ‘Gold’ Certification and an excellent rating under the Haute Qualité Environnementale standard for green building in France.

The timber blades shield against direct sunlight and reduce associated heat gain. Wood has inherent high levels of sequestered carbon, the product is 100 per cent recyclable and its durability avoids issues related to maintenance and replacement. If maintenance or replacement are required, due to damage, the panels can be easily removed.

Large sliding windows in the underlying aluminium facade guarantee optimal daylight for each floor and frame views of the gardens below, enhancing the comfort and wellbeing of employees.

In more general terms, the building was designed to minimise energy consumption, exposed concrete soffits help smooth temperature peaks caused by thermal inputs, such as ICT equipment and building occupation. Some doors are motorised to allow for controlled natural ventilation.

The low-impact environmental approach aligns with the concept to create a building that forms part of the landscape of the city, its undulating hills and valleys a new landmark on the Parisian skyline. 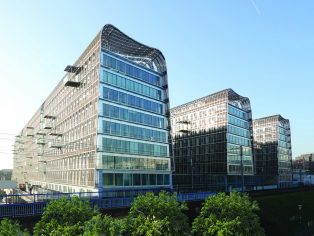 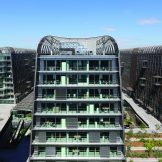 The timber strips are formed from recycled wood, native to Japan, crushed into a pulp in an industrial process that removes the oil content 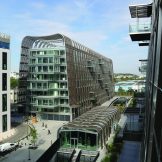