The Templeman Library at the University of Kent features multiple Kawneer systems.

A multi award-winning redevelopment of a university library has used architectural glazing systems by leading UK manufacturer Kawneer for their ability to combine aesthetics with performance and value for money.

They were specified by regular Kawneer users Penoyre & Prasad architects for the £27 million redevelopment, involving a new extension to and refurbishment of the existing building, of the Templeman Library at the heart of the University of Kent in Canterbury.

Penoyre & Prasad’s competition-winning design for the project creates a vibrant contemporary building for study, interaction and exploration, bringing together a variety of study and support spaces, versatile collection and exhibition space, and a teaching suite.

Their approach was to reveal the original building’s hidden strengths by removing sections of floor structure at each level in the central core of the building to let in daylight and create views across the building, and replacing the glazing with the Kawneer curtain walling to weave the new extension and the existing building into one volume.

The treatment of the external facade inverts the balance of the original Brutalist architecture of the building to create a strong and holistic contemporary architectural identity.

“We specified the Kawneer products for their value for money and ability to combine aesthetics and construction quality at the price band, also their ability to achieve the performance requirements.

“They are an extensive part of the facade system, helping to keep the building warm in winter and cool in summer, allowing natural ventilation to the library. A key reason for aluminium was value for money for the interior and robustness for the exterior.”

“The Kawneer products helped us achieve U-values for the external envelope, allowing sufficient daylight into the building while dealing with glare. They create a contemporary building of glass and concrete, combining the existing building with a new extension and upgraded facade.

The bronze anodised mesh veil of the extension facade forms a sophisticated, sustainable envelope that weaves the old and new to create a distinctive flagship building at the heart of the university campus.

The new development provides a wide variety of learning and support spaces and opportunities to share knowledge through, including an open-access teaching floor with a distinctive resin-clad 250-seat lecture theatre, eight seminar rooms, group rooms, cafe, exhibition space and a conference catering and resource facility.

Research included consultation with staff and students from a wide variety of courses, including students with disabilities, to design 1,800 individual, pair and group study spaces across informal, quiet and silent zones to suit contemporary learning styles.

The redeveloped building has achieved a BREEAM “Excellent” rating, largely through the architect’s simple but elegant ventilation treatment, with Kawneer’s opening windows shielded by chain-like screens, stack effect in the double-height volume, and cross-ventilation to cool the inner spaces. Both the metal grillage and monumental external fins serve to shade what is otherwise a Kawneer glazed wall.

Its complexity lies in the scale of investment and in dealing with an existing building that is pivotal to the university’s 15,000 students and needed to remain in use during construction. The Kawneer systems were installed over 15 months by a team of up to six from approved specialist sub-contractor/dealer Leay for main contractor Kier Construction.

“Hinged mesh panels were hung from the Kawneer curtain wall in front of the opening vents at varying heights to mimic the effect of icicles hanging from the roof level. The original design was to have these fixed but for cleaning strategies these had to be designed hinged to access the screen behind.”

“The Templeman Library was the most impressive building on campus when the university was established in the 1960s and it is fitting that as the university celebrates its 50th anniversary we should have transformed it.

“The 21st Century updated and refreshed Templeman Library has moved very significantly with the times to become an impressive modern building containing services and facilities that are equally modern, impressive and important to its current and prospective users.”

The new-look Templeman Library won the 2017 Graphisoft UK BIM’s Public Sector Project of the Year award and was highly commended in the 2017 Concrete Society awards. It was also shortlisted for the 2018 AJ Specification Technology award, 2018 AJ Refurbishment over £20 million award, and 2018 AJ Retrofit Higher and Further Education award. 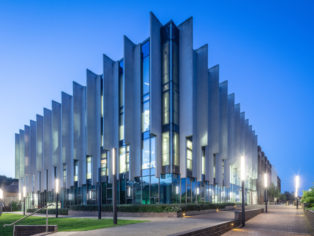 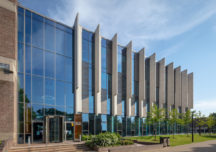