The Jaffreys wanted a home that would look good, be energy efficient, was future-proofed and importantly, could be built quickly, and a timber kit was the answer

When the Jaffrey family set about building their own home near the village of Insch, Aberdeenshire, there were a few items on their wish list. They wanted a home that would look modern and beautiful, take advantage of the views out over the surrounding countryside, would be future-proof by being flexible enough to meet their needs as a family for years to come, would be as eco-friendly and energy efficient as possible, and which could be built quickly.

They appointed local architecture firm Annie Kenyon Architects, who regularly design homes in the area, and builders Cairnrowan Custom Homes, who suggested using a timber kit as the basis for their build. “When our builder explained how well insulated timber frame is, we decided that was definitely the route we wanted to go down,” explains owner Iain.

Before work could begin onsite, considerable clearance work had to be undertaken. The house has been built on sloping ground on the site of an old quarry, and could only be accessed from one side. The house’s height – six metres – also meant major scaffolding was required. Luckily, these factors didn’t impact hugely on the build’s timescale.

The Jaffreys’ desire for a high-quality, energy-efficient, green home that could be built quickly meant timber frame was the right choice. They settled on using a Val-U-Therm Plus closed panel system from Scotframe for the roof and walls, choosing 140 mm wall panels as they offered the best solution for thermal performance and cost effectiveness without having any detrimental effect on the size of the overall footprint.

The house was built efficiently and very quickly – it was wind and watertight within just six days and complete in just 14 weeks. “We were blown away by how quickly we were able to get into our new home,” Iain says. The pre-manufactured roof and wall cassettes helped with the speed of build, thus allowing quicker access for follow-on trades. An open panel timber frame house being built by the same labour force would have taken around 20 weeks, and a brick and block house significantly longer. In addition, the costs of fitting the insulation onsite would have been thousands of pounds extra.

Aside from the build method and materials used, the efficiency and close working relationship of the team – who were all based locally and had worked together before – contributed to the project’s efficiency. Scotframe and Cairnrowan have worked together many times in the past and have designed their own bespoke kit, which helped ensure the build was quick and smooth.

Cairnrowan also project managed the entire build, which took a weight off the Jaffreys’ shoulders – they were kept updated on progress throughout with regular meetings. Cairnrowan took care of everything from preparing the groundwork and erecting the timber kit to organising the electrics and smart home technology. They also managed the internal decoration and landscaping, which helped make the project as seamless and stress-free for the family as possible.

“The game changer for us was that we had so much trust in the whole team,” says Iain. “It’s said that building your own house is one of the most stressful things you can do, but this honestly was relatively stress free and actually quite enjoyable!” He adds: “We’d come and visit the site once or twice a week to see how things were going, but otherwise they just got on with it.”

The family saw this as their “forever home”, so wanted an open plan space downstairs that their small children could enjoy running about in, and that they would get the benefit of for years to come. “That’s why we decided to have the smart technology installed,” Iain says. The house is pre-wired for nine zones of audio and six zones of HD/4K video, as well as 12 zones of heating and 16 zones of lighting.

The 305 m2 detached house has two reception rooms, four bedrooms, four bathrooms, and a cinema/bar room. Ample glazing takes advantage of spectacular views to the nearby hills of Dunnydeer and Bennachie. The 2.7 metre high ceilings and six metre double height areas give a feeling of space throughout.

The open plan ground floor area has floor-to-ceiling windows which open out onto an expansive decking area. One of the home’s most striking features is the galleried entrance hall, home to a contemporary, well-figured oak tread and glass balustrade staircase. The timber frame is covered with a mixture of timber cladding and white render, plus a glazed gable. The roof is finished with slate and, to contrast against the white render, dark grey Nordan window frames were used. In order to meet their desires of being as eco-friendly as possible, the family installed solar panels, a Daikin air source heat pump, and underfloor heating. “From a green point of view, the house ticks all the boxes. Although it’s a much bigger house than we had before, we are paying significantly less for fuel bills, even though our previous house was also timber frame and well-insulated,” says Iain. “We chose the air source heat pump because it is clean and low maintenance, and along with the solar panels, it has been working well for us.”

As well as these features, the closed panel system and accuracy of the build has also contributed to the home’s efficiency, says Iain. It has been given an ‘A’ rating for energy, an as-built EPC of 97 per cent and an airtightness result of 0.38 air changes per hour, taking it to Passivhaus levels in terms of energy efficiency.

The likely energy usage is 28 kWh/m2/year, achieving Gold Aspect level 2 for energy use for space heating from the Scottish Building Regulations – the highest possible level. The calculated emissions are 5 kg CO2/m2/year – over 4.6 times less CO2 per year than the average Scottish household. “The quality of the house is amazing,” says Iain. “Although we’ve been in for less than a year, it feels like we’ve been here for longer – that’s how we know we have made the right decision.” 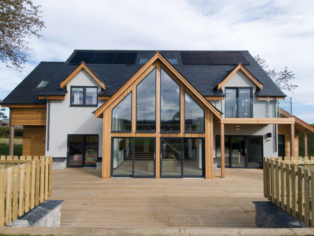 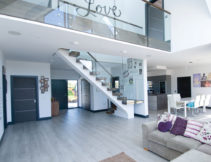