An addition to the University of Massachusetts displays a composition of staggered copper and glass elements to create a dramatic entranceway. Jack Wooler spoke to architects BIG about how and why this domino effect was created

The Business Innovation Hub is the latest addition to the University of Massachusetts Amherst, adding around 70,000 ft2 of “hyper collaborative” study and social space with a ‘domino-effect’ copper and glass facade. This extension has been constructed as though it were a large amphitheatre – surrounded by copper pillars that appear to fall on to one another, connected together across the facade by a glass curtain. The project, designed by BIG-Bjarke Ingels Group with Goody Clancy, involved the expansion and partial renovation of an existing facility, effectively doubling the school’s space in order to accommodate its growth in the last decade. Among the large and multi-faceted group of collaborating firms on the project were Richmond So Engineers, Arup, Big Ideas, Nitsch, VAV, Towers Golde, Haley & Aldrich, Acentech, HLB, SGH, PEER, WIL-SPEC, VGA, Lerch Bates, LN Consulting and Mohar Designs.

UMass Amherst is the main campus of the University of Massachusetts, and as such hosts a wide variety of buildings stretching back to the 1960s. The business school is one of the top 30 in the United States, and its expansion has provided facilities for more than 150 staff and 5,000 students in undergraduate, masters and PhD programmes. The Isenberg School of Management moved to this site in 1964, initially taking form as a large rectilinear, three-storey red-brick building – which still stands today. This was later extended on its southern elevation in 2003, and the new addition effectively follows in its footsteps, adding to the building’s northern elevation. Commissioned in 2015, the Business Innovation Hub directly extends this existing building from the north and east sides in a wide circular loop, linking back on the upper floors to maintain connectivity. In the first instance, BIG and Goody Clancy were given the aim of designing a flexible space that inspired collaboration for all students at Isenberg. Tom Moliterno, interim dean at the school, explores this further: “As a top business school, we want to offer our students, faculty and staff an environment that inspires creativity, communication, innovation, and collaboration—a physical space designed to train and prepare students for careers in the 21st century. The new Business Innovation Hub clearly reflects our mission and vision for the future.” He adds: “Equally important, with flexible spaces and state-of-the-art tools and technologies, the Business Innovation Hub will continue to meet the rapidly evolving needs of the Isenberg community.”

Now completed, the shifting, domino-effect of the new facility’s facade can be seen from across the university campus – displaying a somewhat complex structure. Rectangular pillars are progressively angled downwards as if tumbling onto one another, eventually culminating in a triangular entranceway with the final pillar forming one side of this triangle. This unique exterior is made more expressive through copper cladding – which is laid out in a brick-like fashion – with the intention of the long-term exposure to the elements naturally weathering the metal from a dark ochre to an enduring patina. The copper elements wrap around the sloping facade in such a way that they appear to curve around the building – though in reality they run straight. Each of these copper modules are 2 ft wide, with the glass curtain being 3.5 ft wide. The copper panels are clipped to aluminium rails, fastened to a sheathing clad cold-formed framing structure produced by Ace Panel Worx. When approaching this strikingly formed facility in the evening, the building “glows from the life within,” appearing as an inviting beacon on the campus. Running around the site’s existing faculty building in a C-shape, it is hoped that the new amphitheatre-style addition will create a lasting impression for visitors, staff and students alike. Extending from the existing Haigis Mall to the Learning Commons, it is intended that the dramatic triangular entrance way will provide a more welcoming invitation to the facility. Similarly impressive in the daytime, the copious use of glass between the copper sections allows for a significant interaction between the building’s exterior and its interior workings, the glazing allowing views extending almost 360 degrees around the building’s perimeter. The looped form of the building – which creates a ‘C’ shape – together with this entrance, have now effectively consolidated Isenberg’s faculty and staff under one roof, creating a singular place of arrival and a strong visual identity for the entire Isenberg School of Management. Yu Inamoto, project leader at BIG, explained this further: “The conceptual move to create the building massing and space inside the Isenberg Business Innovation Hub was actually a rather simple one – a loop originating from, and connecting to, the existing building, then stretching one point of that volume to create a multi-storey space.”

Upon entering, students and faculty arrive inside the 5,000 ft2 ‘Learning Commons’. Daylight breaks through to this area from in between the accordion-like pillars to illuminate the multi-storey atrium in the centre of the new addition, where the heart of the business school reportedly “hums with students learning, networking and dining.” This bright and spacious networking area also doubles as an event venue for guest speakers, award ceremonies, banquets and career fairs. Across the Business Innovation Hub are several spaces such as this one, designed with student interactions, teamwork and chance encounters in mind. Helping facilitate this are soft chairs dotted along the corridors, benches fixed to the grand stairway, and classroom chairs that can be easily manoeuvred for theatre-style lectures or small-group work. Similarly, throughout the building daylighting has been maximised where possible, such as around the entrance, where natural light penetrates inside from both the campus and the inner courtyard. The levels of daylighting provided by the designers, as well as the building’s overall atmosphere, have already seen it gain notable praise, with one user quoted as saying ”they want to be in the building all the time”. Walking around this floor, the building’s loop form creates the circular internal courtyard, with the linear structure hugging it. Inside this courtyard, the space is intended to provide a forum for the students, faculty and professionals to meet, mingle and “mix society and academia.” This courtyard is surrounded by the internal spaces of the facility on all sides, with copious glazing providing interaction inside and out and daylighting for work. In the courtyard space itself, the architects have designed an open-air garden and stone benches, which are intended to create an “oasis for collaboration and contemplation.” Access has been provided between this open space and the campus via two pathways between the original Isenberg building and the Business Innovation Hub. The project team have not just allocated this for the ground floor, however, with the building being fused by two bridges above those paths. One is a large bridge cloaked in copper, which is intended as the gateway to the courtyard, while the other, the smaller bridge, displays glazing aimed at providing a visual continuity around the building’s interior courtyard. Going back inside and up to the second and third floors, students and staff occupy the innovation labs, ‘advising’ spaces and faculty offices. To support the career development of every Isenberg student, classrooms have been equipped with integrated technology for distance learning. As well as this, a new function, named the Chase Career Centre, has been provided with 15 new interview rooms, alongside various conference rooms and breakout areas distributed through the loop.

The new building has already received widespread praise from the community and its users. This is not just in terms of its functionality, but in its ecology – with longevity and sustainability in mind, the client has targeted LEED Silver certification. As to its users, about a month after the addition was completed, impromptu interviews were held with the students in order to understand their reaction, and to see if the building was being used as intended. If the interviews are to be relied upon, the project has proved to be an all-round success. Third-year OIM major Michael Zola, for example, hails the spaciousness of the new facility: ”The building’s study rooms and open spaces make it a great place to work, hang out, and network.” Alongside the open nature of the building, the success of the design for fostering a sense of collaboration appeared to be a common theme among the respondents: “Its interactivity and visual projections make it an extremely nice learning environment,” observes freshman Danielle Major, who’s taking her Business Data Analytics course in the Hub’s Business and Analytics Lab. “Although Isenberg has gained considerable space, its savvy design makes the school seem socially smaller,” she adds. All in all, it seems as though the addition has breathed new life into the campus, and is providing students with an added motivation to spend out-of-lecture-hours enjoying the new building’s extra facilities. “Before the addition, I never had any reason to stay at Isenberg,” explains sophomore accounting major Matthew Haggerty. “With the improved atmosphere, I stick around until my homework gets done.” Together with the striking cladding, by a renowned international architectural partnership, this is clearly a success story for the faculty, which provides a very effective new entrance, fitting for one of the US’ leading business schools. 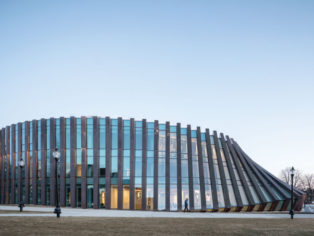 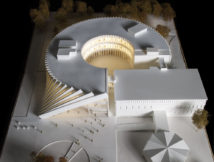 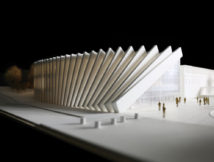 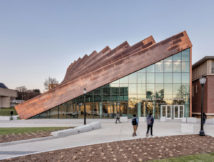 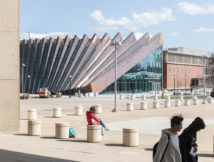 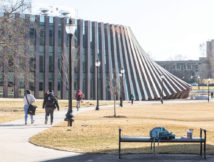 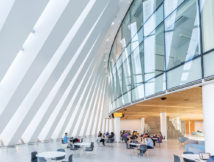 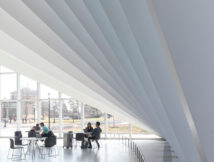 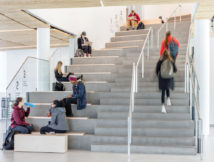 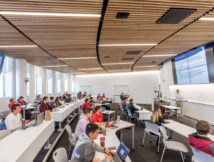