Kawneer helps a healthcare first on so many levels

Curtain walling and windows by Kawneer were used on the UK’s first Proton Beam Therapy centre.

Architectural glazing systems from leading UK manufacturer Kawneer feature on a pioneering healthcare building with so many strings to its bow it is difficult to know where to start.

The new Proton Beam Therapy (PBT) centre at The Christie NHS Foundation Trust in Manchester is not only the first to be built in the UK, it is also the first PBT centre in the world to achieve a BREEAM “Excellent” rating. It has also won multiple awards for its design (around the equipment it houses and the patient experience) by architects HKS.

One of the most complex and precise projects in the history of the NHS, it was delivered on budget and completed ahead of programme by main contractor Interserve who, due to the lack of previous UK PBT examples, travelled more than 20,000 miles around the world to visit 10 such centres and equipment vendors to learn best practice.

The Kawneer systems which feature on its five storeys are the manufacturer’s traditional stick-frame AA®100 zone-drained curtain walling, which has 50mm sightlines, and thermally advanced AA°720 top-hung casement windows which feature a BRE Green Guide ‘A’ rated frame.

Funded by a £250 million Government investment in conjunction with a second PBT centre at University College London Hospitals NHS Foundation Trust, the Manchester site will treat annually up to 750 patients with complex cancers who would previously have had to go abroad for treatment, to typically Switzerland and America.

However, the particle accelerator used to deliver the Proton Beams is as energy-hungry as its sounds and requires a significant amount of power to generate the high-energy beam. This demanded a dedicated electricity sub-station which provides the same amount of power needed to run the nearby Trafford Industrial Park.

The power generated results in similar levels of waste heat but reclaiming this has made a significant contribution to the BREEAM rating.

Modelled using 3D technology and BIM, which is believed to have created theoretical savings of around £1.95 million through early clash detection, the 15,000m2 future-proofed building features three 360° rotating gantry rooms as well as a research room, CT and MRI imaging facilities, patient reception and public space, and planning and support accommodation.

Its list of technical features is almost as extraordinary as PBT itself. To contain the radiation, the concrete walls are up to six metres thick. The building incorporates 20,000m3 of concrete and 1,700 tonnes of reinforcement, including steel bars up to 100mm diameter. Through this, 10km of services pipework has been threaded. The concrete itself weighed 48,000 tonnes, the same as two aircraft carriers, with the biggest single pour in a day being 648m3, the same as 105 concrete wagons.

All of this was conducted in a suburban residential area, on a restricted site, and adjoining live hospital buildings at the UK’s busiest cancer hospital creating immunosuppressed patients.

“From the outset, the design approach was to focus on patient experience. Various measures were applied to create a warm and inviting space, aimed to reduce fear and anxiety. Natural daylighting and landscaping were given high priority, as well as a sense of community amongst the building’s users. The waiting spaces were positioned on external walls and courtyards, and the main waiting area designed as a winter garden, integrating light, vegetation and social interactivity.

“Given the shallow bedrock and water table, the large three-storey concrete structure of the treatment block was placed at grade and is situated in a dominant position near the hospital main entrance. This provided an opportunity to announce the facility’s importance to passers-by, so signage, feature lighting and quality cladding materials were used to showcase the building.”

Manchester’s new PBT centre won Best Procure project in the BBH Building Better Healthcare awards, Building of the Year by Greater Manchester Chamber of Commerce, and North West Building Project of the Year in the Constructing Excellence awards delivered with the BRE. 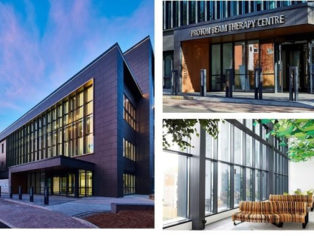