In a metropolis like New York City, the land is scarce and the rents are at a record high. As a result, more and more people are unable to afford a place to live and find themselves homeless. It is currently estimated that over 62,000 people are sleeping in the city’s homeless shelters every night, and that thousands more are sleeping on the streets, in the subway system, and in other public spaces.

Although almost every square foot of space in NYC has been claimed, there still manages to exist an abundance of “vertical lots” sitting idle. These are the blank sidewalls of buildings that emerge and disappear as new developments come and go, providing hundreds of acres of available “land”.

Homed is a proposal by Framlab that seeks to capitalize on these vertical lots by combining a scaffolding framework with hexagonal housing modules. These SRO reminiscent units are designed to connect to the scaffold structure, pack densely, and create a second, active layer along the empty wall. The units form clusters of suspended micro-neighborhoods of shelters for the city’s least fortunate.

The unit is designed to provide year-round housing that can withstand harsh, cold weather and provide a cool space during summer. While the exterior is composed of oxidized aluminum cladding, the interior offers a soft and friendly environment. The 3D printed modules allow furniture, storage, lighting and appliances to be integrated into the structure – resulting in a minimal space, tailored to the specific needs and desires of its resident – with a hexagonal view of the cityscape outside.

Framlab is an Oslo and New York City based creative agency, founded by Norwegian designer, Andreas Tjeldflaat to explore the intersection of product design and architecture.

Learn more about this project at: https://www.welcomehomed.com 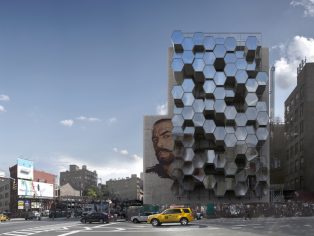 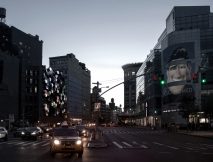 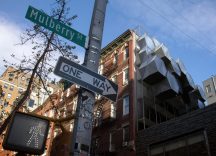 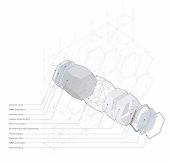