The first Memorial Park for the United Arab Emirates (UAE) celebrating the brave soldiers and other Emiratis who made sacrifice while serving the Nation has been unveiled in Abu Dhabi. An impressive artwork by British artist Idris Khan forms the Memorial at the heart of Wahat Al Karama park.

International art and design studio UAP was appointed to commission the Memorial and collaborated on the pavilion. The studio is behind some of the most unique and ground-breaking public realm projects, such as the centrepiece of the ‘King Abdullah University of Science and Technology (KAUST) Breakwater Beacon’ in Saudi Arabia.

Idris Khan was selected by UAP’s curatorial team from a number of world-renowned international artists that entered the competition. Khan’s profound affinity with the local UAE culture, combined with a strong western voice, made his Memorial the winning project.

“The idea was to create a park for reflection on both loss and remembrance, a spiritual place that conveyed unity and support. I wanted this monument to have positive and hopeful resonance while inspiring curiosity in sculpture and how contemporary art can influence emotions.

“The project allowed me to be ambitious and having been able to create such work gives me great pride.

“It is a place for serenity within a city busy with construction and growth, a major part of a country’s history and landscape that will be absorbed by the cultural awareness of future generations.”

The Memorial comprises 31 aluminium standing tablets, each 23 metres in height. The tablets lean on each other to represent unified strength, power and pride among soldiers, loved ones and their country. With its impressive scale, the Memorial represents the eternal martyr, a place of reassurance and defiance. Its two front tablets stand vertically and are intended to evoke a sense of humility when approached.

The tablets feature a series of Arabic poems and quotes from both the late Sheikh Zayed Bin Sultan Al Nahyan and Sheikh Mohamed Bin Zayed Al Nahyan. The poems and verses encourage the viewer to discover and touch the engravings as they walk through the artwork, creating a personal relationship with the Memorial.

Each tablet was carefully handcrafted by UAP’s design and fabrication team. The 31 tablets are made of a total of 850 cast aluminium panels. UAP’s team used a hand painting technique to achieve a delicate gradient of colour on the surface that captures the light rather than reflecting it.

“We feel privileged to have had the opportunity to collaborate with an exceptional artist like Idris Khan, to understand and deliver his unique creative vision.

“An integral part of Idris Khan’s practice is a repetitive action of mark-making and erasure. The result is a subtle, intense texture which forms an infinite pool of marks, seeming to appear and disappear. UAP’s team successfully translated the artist’s beautiful and timeless mark-making into 3,000 square metres of cast metal.

“Working closely with Khan as the design developed, and throughout the fabrication process, the team’s creative problem-solving abilities enabled the translation of the monumental vision into a tangible object.”

As part of the commission, UAP oversaw the design and delivery of The Pavilion of Honor, also designed by Idris Khan in collaboration with Brisbane-based architecture firm bureau^proberts and engineering consultancy Robert Bird Group.

The Pavilion of Honour is a circular structure located at the end of the visitor’s journey. In its centre are seven standing glass panels surrounded by a water feature, representing the seven emirates of the UAE. The circular internal wall is cladded with 2,800 aluminium plates made from reclaimed metal from armoured vehicles used in service, which are inscribed with the names of the UAE’s heroes.

The landmark also includes the Visitor’s Centre at the entrance and The Memorial Plaza which also serves as an amphitheatre for events. Wahat Al Karama is open to the public every day from 9.00am until midnight. A national public holiday on 30 November honors the lives of fallen soldiers in the present and past conflicts.

Engineering firm AECOM was responsible for the overall design of The Memorial Park. 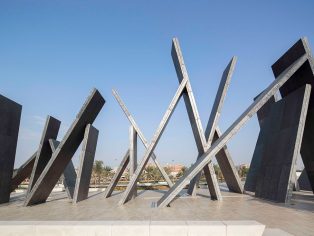