Armstrong Ceilings prove their metal for the Metropolitan Police Service

Metal ceiling systems from Armstrong feature on the redevelopment of New Scotland Yard.

Custom metal ceiling systems from Armstrong World Industries have brought form and function to the award-winning transformation of that bastion of island security – New Scotland Yard.

Armstrong’s metal F-H 600 hook-on tiles and swing-down rectangular planks with concealed G-Profile grid and acoustic fleece, and metal T-Clip F tiles with Spring-T grid, were specified by Allford Hall Monaghan Morris architects for the £65 million remodelling, refurbishment and extension of the headquarters of the Metropolitan Police.

With a constrained floor to ceiling height the Armstrong systems met the demands for electrical servicing and lighting while mechanical services, data and small power outlets were installed in a raised access floor void.

As well as the circulation spaces, corridors and lift lobbies, Armstrong’s custom micro-perforated metal systems, which perform up to sound absorption Class A, were also used for the ground-floor multi-use and Press Rooms where acoustic absorption and integration of lighting were key design considerations.

“The ceilings are generally acoustic plasterboard apart from the doughnut of service runs on each floor which are made from the Armstrong demountable metal ceiling planks. These have an aesthetic and practical application, allowing the integration of light fittings and so on, and can be demounted for access or change in the future.”

“The Armstrong systems were detailed with minimal interfaces with other surfaces, thus avoiding trimming or cutting.”

The redevelopment of the former Curtis Green building (so named after its architect William Curtis Green) on Victoria Embankment involved demolition, a new structural steel frame, new cladding and interior remodelling to make a 21st Century smart workplace with an engaging public realm.

AHMM’s design is a radical remodelling and extension of the 1930s stone-fronted building. The core objectives of the brief were to create modern, flexible and efficient office environments, extend available floor space and facilitate agile working with more interaction between staff and visitors.

The design has transformed the building with the addition of an elegant curved glass entrance pavilion, a new rooftop pavilion, extension of the floor plates to the west and the reworking of the existing accommodation which has expanded the building’s floor area from 8,691m² to around 12,000m².

The contemporary design of the new extensions sensitively complement and enhance the architectural features of the original Neo Classical building and respond in materials, colours and proportions to neighbouring Whitehall buildings.

Inside, AHMM has created a flexible office environment to facilitate collaboration and interaction. The rooftop extension provides multi-use conference space and terraces and is illuminated to give presence at night, symbolising the 24/7 nature of policing the nation’s capital along with creating a civic presence.

New Scotland Yard has won numerous awards including an AJ Retrofit award for Best office over 10,000m² 2017, Building Magazine’s Project of the Year 2017, and the Prime Minister’s Better Public Building Award 2017, along with a RIBA London Region Award 2017 and RIBA National Award 2017.

More information is accessible via the Armstrong Ceilings website. 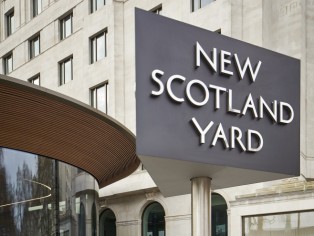 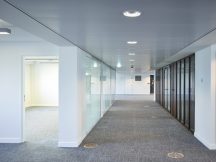