An industrial building within the environmental context

Anatolia Tiles, a warehouse and administration building designed by Iglo Architects in Izmir, Turkey draws attention with its architectural style that establishes a bond with its surroundings and its internal functions designed within the framework of employee comfort and productivity principles.

Anatolia Tiles is a Canadian company who imports ceramic tiles they got produced in Europe and Turkey and sell them in Canadian market. Recently they decided to sell their products in the U.S. market as well, especially in the southern part. As a result of their strategical plans they decided to build a logistic center in Izmir, Turkey as direct sea transport from SouthernTurkey to Southern US came out to be much cheaper than road transport.

The company has 10 similar logistic buildings in Canada, thus they are used to working with architects and they were in the expectation of a similar design approach in their new building with their existing buildings. While producing solutions in the operational side, Iglo Architects made use of the client’s references in Canada as well. Whereas on the office spaces the client had new requirements. Their priority was a spacious, joyful and high quality workspace.

Another important demand was the 800 sqm. showroom with a ceiling height of eight meters where design alternatives were to be studied. In this part the client asked for showrooms and meeting and guest rooms, a lounge and also needed a space that they can use as a residence during their visits to Turkey.

Iglo Architects solved all these functions on the top floor. A private roof garden for the residence part, gym and rooms with the comfort of a hotel room. On the other part they had private offices spaces where they can host their guests and they can also share the roof garden with the guests. Big meeting rooms and a showroom are situated on the ground floor. A majestic staircase at the three story high entrance hall welcomes the visitors. On the first floor a cafe/restaurant serves to the office part with its open terraces. A transparent facade was a requirement of the client both for operational ease and comfort, but a an appropriate solution suitable with  hot climate of the region was to be designed.

By means of this, the architects placed a refreshing and cooling water activity that brought the visual and the functional solution together in the building. The dynamic architecture created by solids and voids, protrusions and recessions derived from functional needs on different floors also serves as part of the solution. To take all this dynamism under a mild and kind order and discipline we tried to create a linear and slender architecture to in the overall geometry of the building. The translucent material of mesh on a steel frame on the overall facade provided not only this unity but a protection for the building from the movement of the sun on the horizontal and vertical planes.

At the courtyard that makes the entrance of the building and where the protruding office part forms a deep overhang, this architectural element lets the facade flow to by creating certain visual perspectives and spatial sensations. A full glass facade was avoided at the showroom space which has a high ceiling. Three meters high blind wall with light slots surrounding the showroom scaled down the space into human scale and provided the sense of boundary between the exterior and the interior.

The light slots on this blind wall helps keep the majestic effect of the high ceiling while reducing the scale down to human. With all these effects, the water meeting the curtaining mesh and the art objects a pleasant ambiance in the sense of an art gallery was attained both at the interior and the exterior space. Terraces beneath this mesh frame, met the static needs and served as smoking balconies for employees. At the operational part of the building prefabricated heat insulation panels were used. At the 75m long facade of panels, deep carcasses were formed at junctions to help the dance of light-shade to be felt. This helped to break the monotony of a continuous facade. The same effect is used as a reminder in the form of light slots at the office facade.

At the operational part of the building a technical building including office, restaurant and technical spaces for blue-collar workers was organized. A canopy designed with the same mesh frame used on the facade was used as an architectural element connecting the two blocks and at the same time to serve as a sunshade for staff vehicles. Incoming and outgoing cargoes operations were separated and placed on two long facades and large truck roads were provided on both sides for comfortable truck maneuver. At the narrow facade on the office side, a calm workspace away from all this hectic operation aimed to be created by a good landscape design. But the staff can still check the operations visually from the protruding structure at the office side. 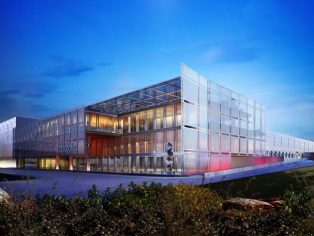 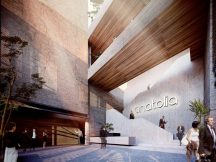