Tengbom designed the Alingsås district court’s zinc-clad extension with respect both to the people and to the democratic rule of law. Now the building has gone through to the next round in the prestigious WAF Awards, competing against projects from all over the world.

The original district court in Alingsås is a characterful brick building from the late 19th century, designed by Adrian Crispin Pettersson. Last year saw the completion of an extension designed by Tengbom. Now it has beat formidable competition to maintain its place in the prestigious WAF Awards in the Civic and Community category. It goes without saying that we are extremely pleased and proud.

Social institutions such as the court system are the backbone of our country, and as an architectural office we believe it is important to give form to them in such a way that shows respect for the people who work there, the rulings made and the democracy that we all enjoy.

The extension, with its precise appearance and innovative use of zinc plating, previously won the Metal Prize.

“The building was sketched entirely in 3D, with a design that took playful inspiration from the original building, and with a choice of materials that accentuates and complements both of them. It’s great that they were brave enough to go through with our designs and that the building is being recognised and held up as a source of inspiration.”

“It’s really great to see a smaller project in a smaller town receive international attention. Also, that good design and thorough production end up in the spotlight.”

“The fact that we are going further in the WAF Awards this year also shows that our architecture is of an international standard, which is wonderful and important. Tengbom doesn’t just have one spearhead project but continuously invests in delivering superb design and functionality.”

The World Architecture Festival is one of the most prestigious events in the architectural world and takes place between 15 and 17 November. The nominees come from all over the world and the two winners will be announced on November 17 at a gala in Berlin. 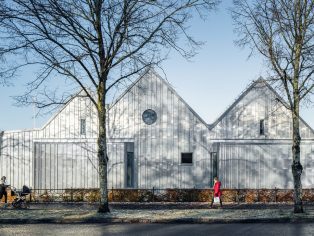