The shortlist for the prestigious 2017 RIBA Stirling Prize for the UK’s best new building has been announced today (Thursday 20 July). The six shortlisted buildings (below) will now go head-to-head for architecture’s highest accolade, to be awarded by the Royal Institute of British Architects (RIBA) on Tuesday 31 October 2017. Now in its 22nd year, the 2017 RIBA Stirling Prize is sponsored by Almacantar.

“This year’s shortlisted schemes show exceptionally creative, beautifully considered and carefully detailed buildings that have made every single penny count. Commissioned at the end of the recession, they are an accolade to a creative profession at the top of its game. Each of these outstanding projects has transformed their local area and delights those who are lucky enough to visit, live, study or work in them.”

A variety of materials have been used across the projects with the judges commenting:

“Barrett’s Grove is a characterful building in a disjointed urban street. Its adjacency to a primary school is a fitting location for a house built with the fairy-tale materials of brick, wood and straw.

“The staggered hit-and-miss brick skin of the façade makes a larger-than-usual pattern, which fits the tallness of the overall building. Wrapping the skin up and over the roof, emphasizes the simplicity of the building’s form.”

“A system of fritted glazed horizontal panels allow controlled light into the building while insuring protection for the exhibits either on display or within the workshops. This allows curation of precious artefacts to occur in an environment that maintains access to natural light.

The jury appreciated the way the architects had overcome planning and heritage concerns in relation to the building for new offices which are sunk below ground but grouped around an attractive glass-roofed central space.

Generally the jury admired the skill and control the architects had demonstrated in realising the client’s enormously complicated and demanding brief while maintaining a rigorous and disciplined plan and an elegant external cladding system.”

“The striking new visitor entrance, clad in black zinc, knits together the historic fabric to either side. The decision to use black cladding rather than a white structure which would match existing, and the decision not to mimic the pitch of the existing roofs, was a bold move in conservation terms and very successful.

“The palette of black metal, blue limestone, board-marked concrete and composite timber has been carefully chosen in response to the strong, industrial language of the historic buildings and landscape.”

“The materials palette and form of the building are deliberately restrained to generate something of skill, clarity and elegance, on the grandest scale.

“This architectural skill extends beyond the cityscape through to the detailed care taken in the organisation of student spaces, encouraging social interaction across disciplines, to the considered approach to materials and detailing.”

“The new visitor centre replacing the weakest section of the damaged pier is a relatively simple CLT structure clad in reclaimed timber which was salvaged from the original fire-damaged pier. This helps to create a strong feeling of place and belonging.

“ offers flexibility, material and functional sustainability, and an uninterrupted vista of the natural and built surroundings.

“The project has been mindful to integrate material from the original pier in the new design, and the process of restoration was used to help train a new generation of craft specialists.”

Photography Studio for Juergen Teller, west London by 6a architects

“Board-marked poured concrete registers the rhythm of the existing brick built party walls. Two raked concrete stairs brace the studio space, the only interruptions in an open landscape, which runs the length of the site.

“Detailing throughout is exquisite; from the in-situ concrete of the finely formed stairs, to the seamless brass balustrades. Large but delicately beaded timber window frames, add refinement to an otherwise minimal material palette. The building is an exemplar of fabric first and low energy design. The integration of services is expertly handled.”

Full details about each of the projects as well as the judges comments can be found at architecture.com 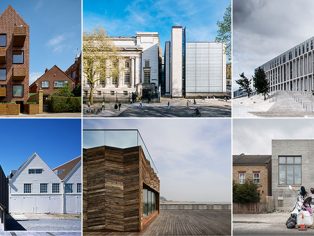